Cities were never designed
to handle gun violence on their own

OUR WORK CAN HELP YOU

Build a higher level of trust between police and your communities.

Achieve better outcomes for young people at the highest risk of violence.

We Work Alongside . To Make Positive Organizational Changes To Communities

We do this by partnering with local police departments and other stakeholders to analyze large numbers of homicides and shootings to understand how violence plays out in local communities; who is involved; the social network dynamics and the hyper concentration of violence. By identifying the very small number of people who are at the highest risk of violence, cities can invest police and intervention resources where they will be most effective in reducing violence, and avoid unfocused tactics and strategies that can criminalize young men of color with little public safety benefit. 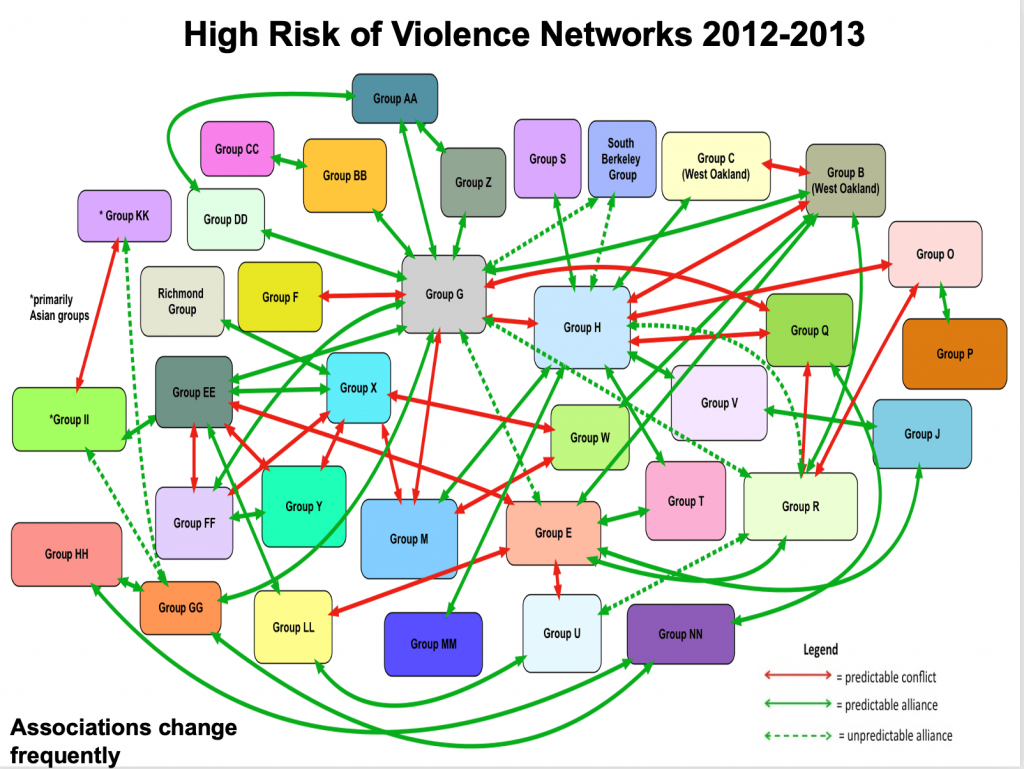 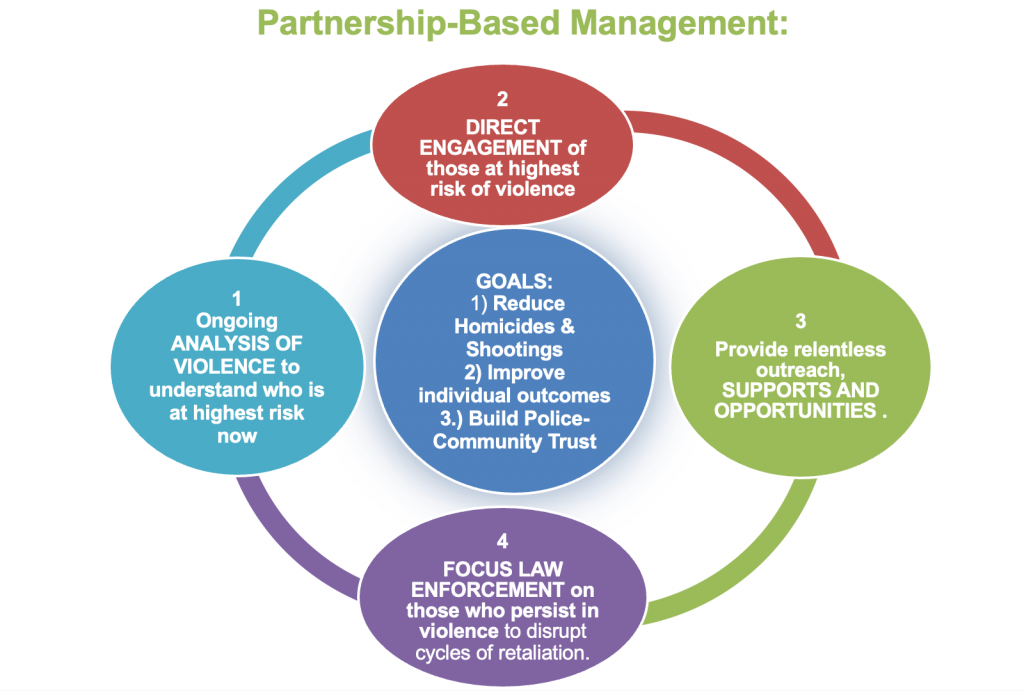 We enable police and community-based organizations and social service agencies to rapidly mobilize evidence-based interventions for young people at immediate risk of violence. Applying rigorous management practices to address the problem of community gun violence is one of the least recognized but most critical steps to address it.

We develop pathways to safety for young people at the greatest risk of violence.

We do this through the efforts of “credible messengers” – life coaches and case managers trained in evidence-based practices. We also help cities assemble robust communities of support to provide a wide array of services, support and opportunities that can help change the odds for community members at imminent risk of violence. 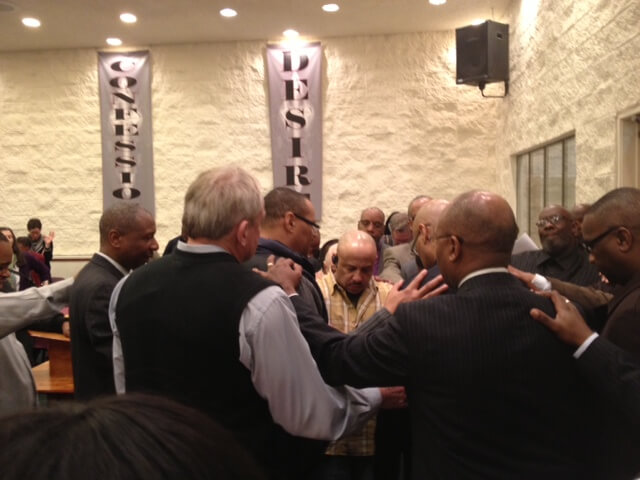 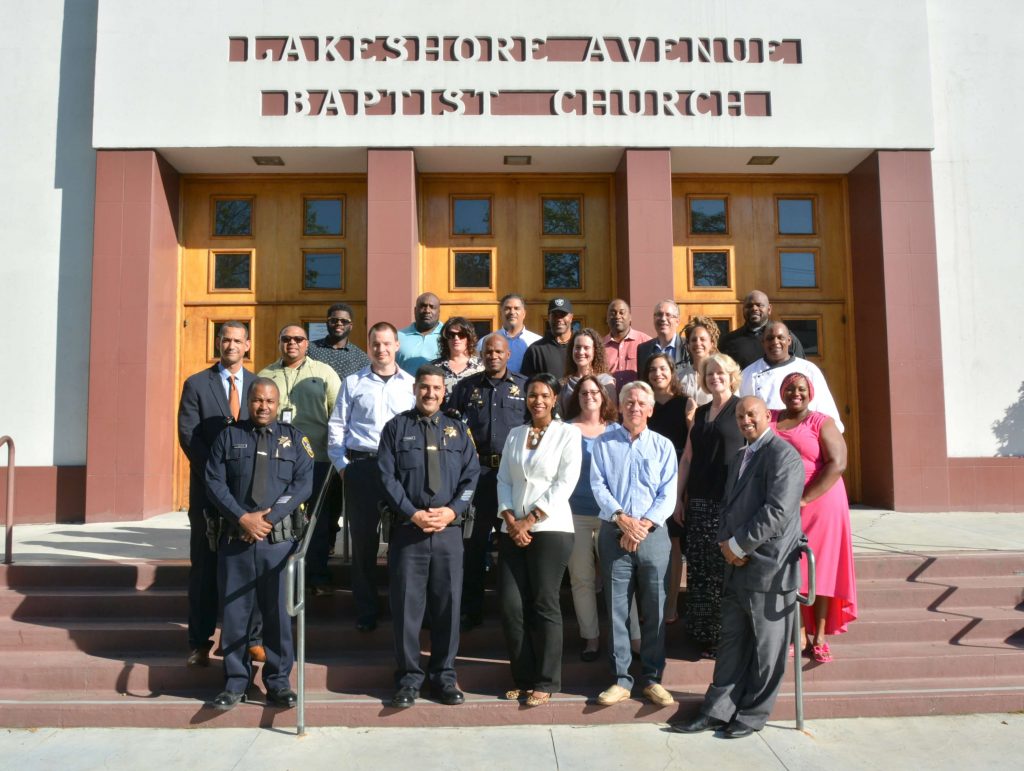 We improve relationships and trust between law enforcement and community members.

We use evidence-based approaches like procedural justice and shared governance to build relationships and trust between law enforcement and community members most impacted by violence – those who need police the most, but often trust them the least.

We make concrete changes to improve police operations and organizations

We help make community intervention efforts a first resort and focus enforcement efforts on the small number of individuals who are at the highest risk of driving violence. This requires significant changes to how police departments are organized; what performance indicators they measure and manage towards; reporting relationships and how they relate to external partners including other government agencies and community violence intervention practitioners 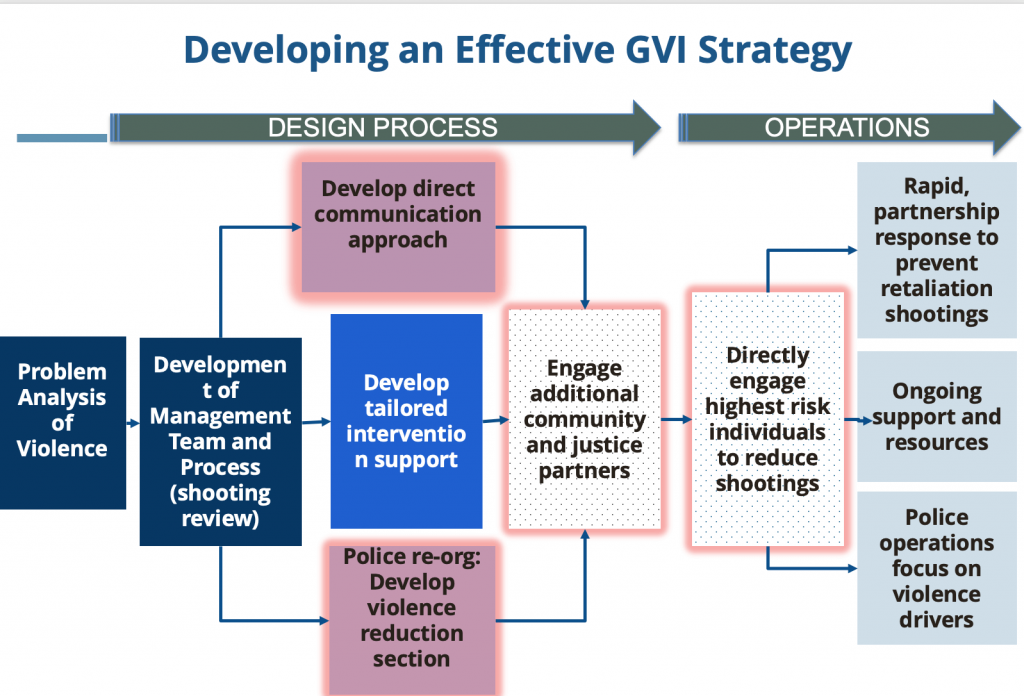 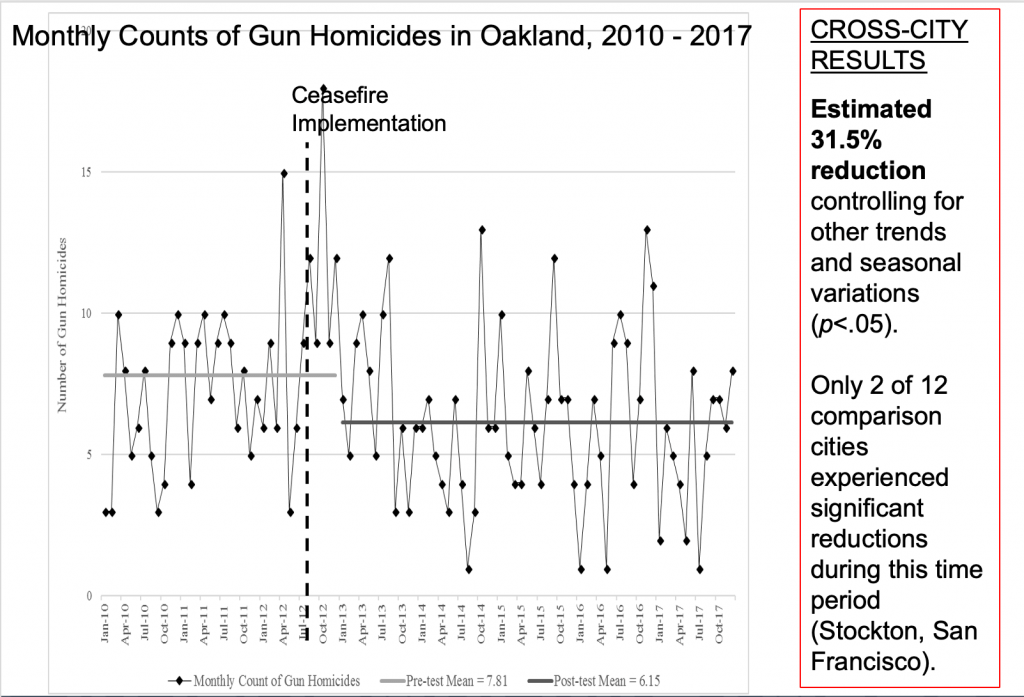 We partner with researchers to evaluate the effectiveness of these efforts

We partner with the University of Pennsylvania, Yale University and others to systematically evaluate the effectiveness of our work with cities. These collaborations regularly produce problem analysis, learning assessments, policy papers and impact evaluations.

We ensure the long-term sustainability of these efforts

We do this through specialized tax measures, effective governance and management approaches and the development of Offices of Violence Prevention. We promote devoted funding and infrastructure to help cities achieve meaningful reductions in violence, develop robust community violence intervention efforts, and improve the functioning of local criminal justice agencies. 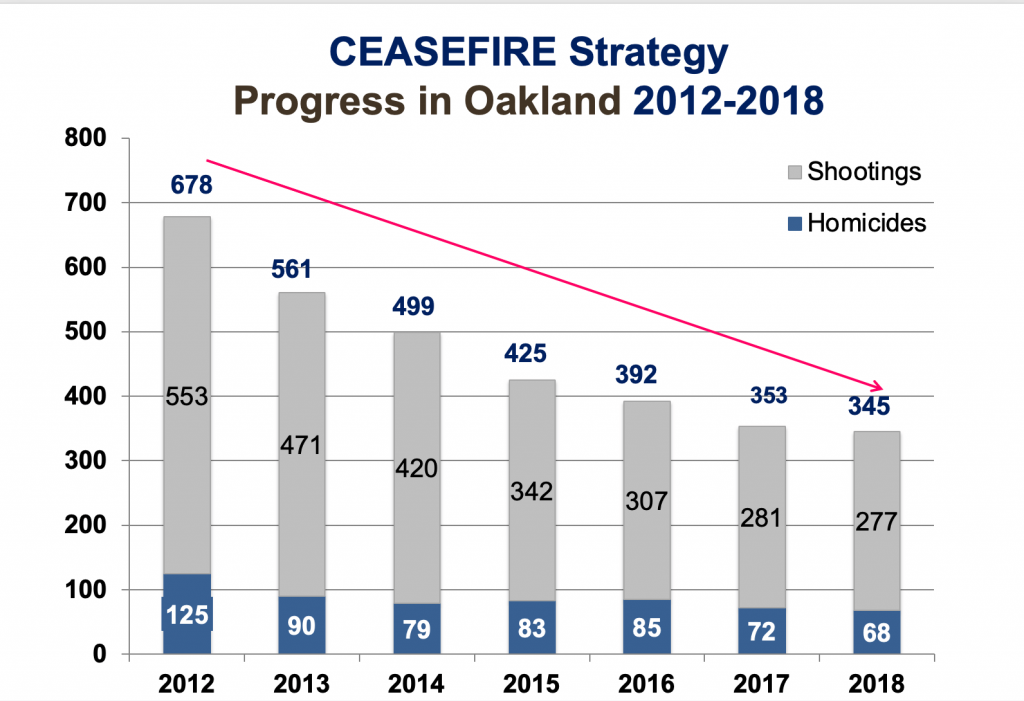 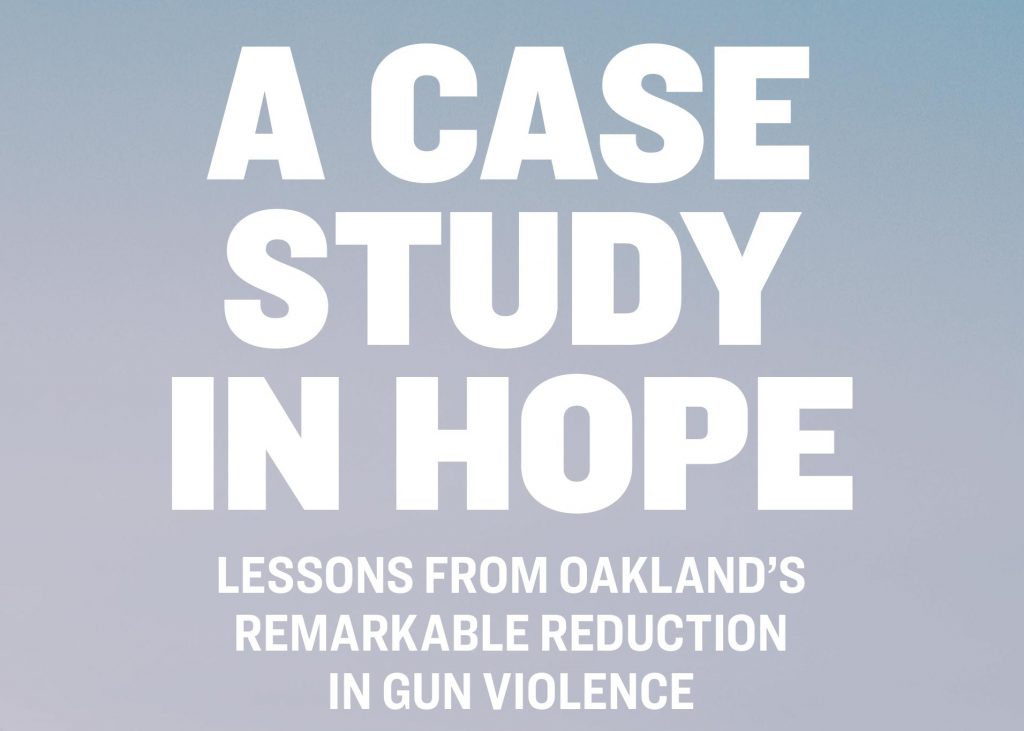 We mine the lessons of our work to inform public policy

We synthesize the lessons of our work in major cities to reduce violence and use them to inform sound public policy in California and beyond. We’ve done this on police training and community trust building through our partnership with the California Department of Justice; through our current work with Giffords Law Center and CALVIP Coalition, developing the CALVIP Grant Program and the Break the Cycle of Violence Ac (AB1603). We continue to do so through our work to understand Bay Area regional violence dynamics with the support from Kaiser Permanente and Bureau of Justice Assistance and our partnerships with Professor Anthony Braga to study local illegal gun markets that provide crime guns in several Bay Area cities.

What People Are Saying

As community organizer for over two decades, the CPSC has been a truly invaluable partner in helping to transform cities and police departments to not only build trust but to effectively address the epidemic of gun violence that has plagued Black and Brown communities for generations. The level of hands-on engagement, expertise and commitment by their team, puts the lives of our young men first and it is this type of values led partnership that cities need to reduce gun violence now.
Rev. Damita Davis-HowardOakland Ceasefire Director
As a city council member and as the former Mayor of Stockton, California, I worked very closely with the California Partnership for Safe Communities for many years. CPSC played a critical role in helping the City of Stockton achieve significant reductions in gun violence while also building trust between police, local government and our most impacted communities.
Michael TubbsFormer Mayor of Stockton, CA
Founder and Chair of Mayors for a Guaranteed Income
I worked with The California Partnership for Safe Communities (CPSC) for almost a decade. Their work helped the City of Oakland dramatically and sustainably reduce gun violence while also building trust between the police and communities of color impacted by violence. They are the best in the business at what they do
Chief Leronne ArmstrongOakland Police Chief
The reduction of violence is one of the most pressing, complex, and challenging issues of our time. It requires genuine collaboration between communities, civil organizations, law enforcement, and local governments. And it requires a fundamental shift in how we traditionally understand and respond to crime and violence. The California Partnership for Safe Communities stands apart because of its rigor, effectiveness, and commitment to evidence.
Rodrigo Canales, Ph. DFaculty Director, Social Impact Program at Boston University Questrom School of Business
I’ve worked closely with The California Partnership for Safe Communities (CPSC) for many years in many cities. No organization is better at helping cities undertake the difficult work of designing, implementing and sustaining violence reduction and police-community trust building efforts.
Anthony Braga, Ph.DDirector Crime and Justice Policy Lab University of Pennsylvania
Previous
Next

How do we reduce gun violence in California?

Gun violence is a complex and durable problem without easy solutions.  However, several decades of research and practice have shown that a number of approaches can effectively reduce serious violence on individual, neighborhood and community levels.  Resources.

At CPSC, we work primarily from the most powerful and effective but also the most complex framework, known as focused deterrence, group violence intervention or Operation Ceasefire.   Resources.

When police and impacted communities work together with technical experts; invest in understanding the violence problem they have; engage those at highest risk together with a commitment to both support and accountability; and change the way local government operates to support these commitments, they can very significantly reduce violence in the near term. How We Work.

I’m a reporter, how should I best contact you for a story?

Available research indicates that policing-only suppression approaches are not effective in sustainably reducing gun violence.  However, approaches where police partner with community stakeholders to take a problem-solving approach to addressing gun violence can be quite effective.  This work is difficult to do successfully and is much more likely to be effective with the support of technical experts. How We Work.

What is community violence intervention?

Community violence intervention programs (CVI) focus on reducing gun violence by establishing relationships with those at the center of gun violence in communities. Most CVI programs utilize “credible messengers” - people with similar lived experience to those at risk of being a victim and/or perpetrator of violence.

CVI programs seek to establish relationships with those at high risk of being involved in violence in order to mediate conflicts, prevent retaliation, help participants make better life choices and provide access to opportunities. The current research evidence on CVI approaches is growing but mixed. Many programs and approaches show promise; but effectiveness varies from program to program and more rigorous research is needed.

What is Operation Ceasefire?

Like many American cities during the late 1980s and early 1990s, Boston suffered an epidemic of youth violence that had its roots in the rapid spread of street-level crack-cocaine markets. In 1995, as part of its ongoing efforts to address the problem, the police department launched the Boston Gun Project, which aimed to analyze the underlying causes of the problem and then used that analysis to identify the most promising strategies for preventing and controlling serious youth violence. The analysis and planning phase began in early 1995 and the strategy, named Operation Ceasefire, was implemented in mid-1996 (Braga and Winship 2005).  In the four years after Operation Ceasefire was launched in 1996, youth homicides in the city dropped by almost two-thirds. (Kennedy, Piehl, and Braga 1996).

The approach was subsequently replicated in a large number of American cities as the most prominent and successful example of citywide violence reduction approaches.   In essence, Operation Ceasefire (focused deterrence) is a problem- oriented approach to reducing serious violence that can also be applied to other categories of serious crime.

The development of a focused deterrence strategy typically entails the following steps:

In a review of all the available evaluation evidence, Braga et. Al. found focused deterrence strategies highly effective in reducing violence in 22 of 24 rigorous evaluations (Braga, Weisburd, and Turchan 2018).  A similar review of available evidence for U.S. AID by Thomas Abt and Chris Winship came to similar conclusions – focused deterrence is highly effective (Abt and Winship 2016).

Cities that pursue Operation Ceasefire or focused deterrence with academic and technical support are much more likely to succeed than those that attempt to “go it alone” (Braga, Weisburd, and Turchan 2018; Corsaro 2018; Corsaro and Engel 2015).

Operation Ceasefire acknowledges that the risk of violence concentrates among a very small number of people, and that focused problem solving efforts that mobilize police and a range of working partners are more likely to be effective.

What is procedural justice?

Any comprehensive strategy to strengthen police-community relations and build police legitimacy should ensure police (1) consistently treat people with dignity and respect; (2) give them “voice,” a chance to tell their side of the story; (3) make decisions fairly and objectively, based on facts; and (4) act in a transparent way that reassures people of their good will.   These are the core principles of procedural justice.  Extensive work by Tom Tyler and Tracey Meares, among others, has demonstrated that departments that practice these principles see increased public support, cooperation, and compliance with the law (Weisburd and Majmundar 2018).  These findings hold across different ethnic groups and communities.

No.  Rigorous research has repeatedly shown that gun buybacks do not reduce gun violence.  They do not take likely crime guns off the street and they do not influence the behavior of likely perpetrators.