What we’ve learned through hands-on experience: In order to successfully and sustainably reduce violence, we have to change how cities work

Prior to founding CPSC in 2012, many of us had already worked on local justice reform and violence reduction efforts in a range of American cities. We came from a variety of backgrounds, but we shared a commitment to reducing violence and improving public safety while also seeking justice.

Through this diverse experience in cities across the U.S. and California, we came to understand that individual programs or policies simply aren’t powerful enough to address the gun violence crisis that plagues so many of our cities.

Instead, cities need an in-depth, experienced partner who is both an expert and an ally; someone to come alongside them and help them engineer the political alignment and organizational changes across policing, intervention and city governance needed to address a problem as complex as gun violence.

We created CPSC with that mission in mind: to help cities achieve near-term and community-wide reductions in violence; while improving police-community trust and changing the odds for community members at imminent risk of violence. 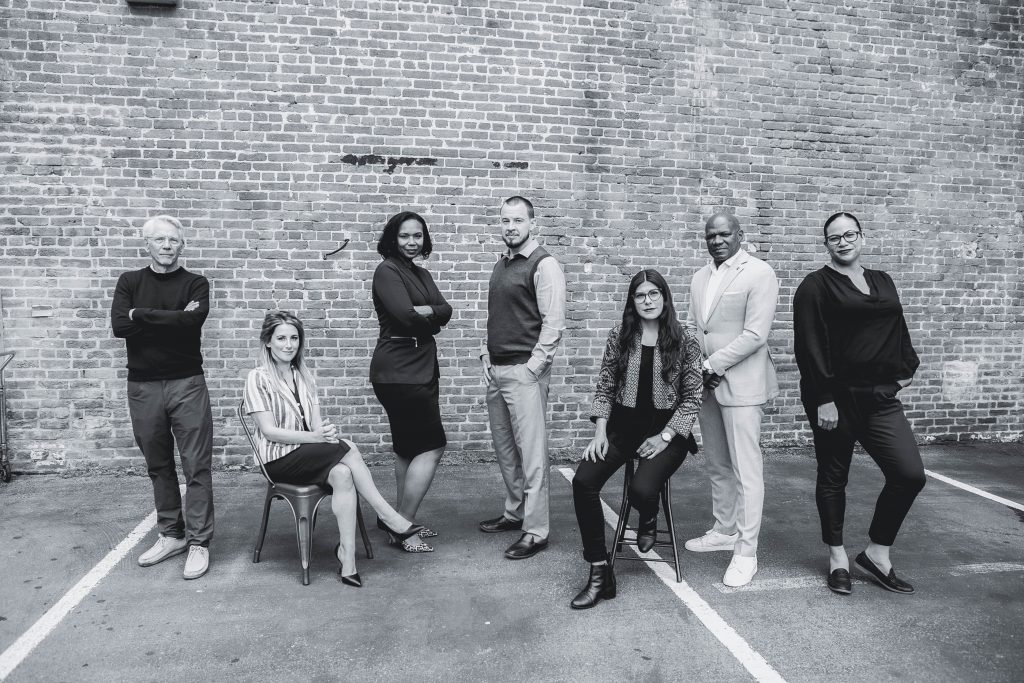 Vaughn Crandall works with cities to apply evidence-based strategies to reduce violence, reduce the use of incarceration, and build police-community trust. Vaughn has led and supported violence reduction efforts in over a dozen major U.S. cities. Previously, Vaughn served as a Deputy Director of the Center for Crime Prevention and Control at John Jay College of Criminal Justice, where he helped to launch the National Network for Safe Communities. Vaughn also has experience in local corrections and identity-based conflict resolution, including police-community conflict. He holds an Executive Certificate in Public Leadership from the Kennedy School at Harvard, a Master of Public Administration from New York University’s Wagner School of Public Service and a Bachelor of Arts from Ohio University.

Reygan E. Cunningham works with service providers, multiple law enforcement agencies, impacted community members and elected officials to reduce shootings and homicides involving street gang/groups in several cities throughout California and in Mexico City. Reygan was the director of the Oakland Ceasefire strategy from 2012-2018, after which Oakland saw significant reductions in gun homicides and shootings. Reygan and her team have received numerous awards for this groundbreaking and lifesaving work, including a resolution from the Hon. Rob Bonta of the California State Assembly. Prior to this position, Reygan served as the Public Safety Legislative Analyst to the Oakland City Council, Complaint Investigator to the Citizens’ Police Review Board, and Public Safety Director to the Mayor of Oakland. Reygan holds a Juris Doctorate degree from the University of San Francisco School of Law, a Bachelors of Arts degree from Spelman College, and completed the Leadership for the 21st Century Executive Education course at Harvard University. She lives in her hometown of Oakland, California.

Before joining the CPSC team, Marina was the Policy and Implementation Manager at Innovations for Poverty Action (IPA), where she led an initiative called “Building Effective, Resilient, and Trusted Police Organizations in Mexico” in collaboration with Yale University. There, she led the adaptation and implementation of several projects such as Focused Deterrence of Violence, training on Procedural Justice, and the National Model of Citizen Security. Marina also has experience in crime prevention strategies through environmental design. She belongs to the Open Government Fellowship of the Organization of American States, and is a facilitator in transformative leadership at the Dalai Lama Center for Ethics of the Massachusetts Institute of Technology (MIT). She holds a master's degree in Criminology and Criminal Justice from the University of Glasgow. Marina’s projects seek to encourage organizational transformations to reduce injustices.

Deitra Rougeau works closely with the Executive Director and Co-director to coordinate business logistics, program management, support the Senior Fiscal Manager, and assist with the general operations of the organization. Before joining CPSC, Deitra worked in the financial services sector for an industry specializing in the retirement space. During her time there, she held many roles, including providing executive level administrative support, human resource management, and overseeing one of the largest departments within the organization: cash management. Deitra holds a degree in Business Administration and will soon graduate from Cal State East Bay with a B.A. in Strategic Communication.

Captain Joyner has 28 years of law enforcement experience with the Oakland Police Department (OPD), 24 of those years serving in a supervisory and command role. He most recently served as the Ceasefire Commander in the Office of the Chief of Police, where he directed the City’s Ceasefire Violence Reduction Strategy, working with both community and government leaders to implement the nationally recognized Operation Ceasefire model. These operations resulted in the smallest number of arrests, uses of force and officer-involved shootings of all proactive units at OPD. Across his decades-long career, Joyner held a multitude of roles, including Patrol Division Area Commander and Homicide Section Commander. His work with OPD carries a theme of tangibly reducing violent crime in Oakland. He retired as the most decorated officer in OPD history having received six medals of merit and one Officer of the Year award.

David is currently the Executive Director of the National Institute for Criminal Justice Reform (NICJR), a nonprofit that provides technical assistance, training and consultation to government agencies, community-based organizations and philanthropies in the areas of criminal justice, juvenile justice, youth development and violence prevention. As part of his work with NICJR David serves as lead consultant to the Sierra Health Foundation’s Positive Youth Justice Initiative, supporting probation departments throughout California as they transform their juvenile justice practices. He also provides leadership and technical assistance to the Ceasefire Violence Reduction Strategy in Oakland and Stockton, Calif. One of the lead consultants for the City of Oakland’s Gun Violence Reduction Strategy, David helped the city achieve five consecutive years of decline in gun violence. He is also currently working with the San Francisco Department of Children Youth and Families and is a consultant on the Mayor’s Blue Ribbon Panel on juvenile justice reform. David’s past roles, including his role as correctional officer, have formed his expertise in community corrections. His work focuses on developing appropriate services and supports for individuals at the highest risk of violence.

Dr. Barao is an assistant professor at Westfield University in Massachusetts. She teaches courses on the administration of justice, evidence-based policing and various topics in law enforcement. Earlier in her career Dr. Barao taught at Central Connecticut State University, Goodwin College and Northeastern University. She has worked on projects with several police agencies located in Massachusetts, Connecticut and New York. She’s also worked closely with CPSC’s team and clients in California on problem analysis, evaluations and other data and analytical projects. Dr. Barao is a member of the American Society of Criminology, the Academy of Criminal Justice Sciences and the American Society of Evidence-Based Policing. She received a Doctorate in Criminology and Justice Policy from Northeastern University, a Masters in Criminal Justice from University of Massachusetts at Lowell, and a Bachelor of Arts in Criminal Justice from the University of Massachusetts at Amherst.

Stewart co-founded the California Partnership for Safe Communities (CPSC) in 2012 after managing technical assistance for the statewide CalGRIP grant program in partnership with the Governor’s Office of Gang and Youth Violence Policy. Before that, he directed the Stockton Peacekeeper program, which reduced homicide by more than 40 percent and received the highest rating from the Office of Justice Programs. At CPSC, Stewart played a lead role in supporting a number of cities as they implemented evidence-based violence reduction strategies. Additionally, he has focused increasingly on community-police trust building as a foundation for effective violence reduction efforts on both a local and state policy level . Stewart was also the founding director of the Community Partnership for Families of San Joaquin (CPF). The Bridgespan Group described CPF as an “effective needle-moving collaborative” blending community organizing and economic empowerment. Stewart has an MPP from the Kennedy School of Government at Harvard, where he also worked as a researcher in the Program in Criminal Justice Policy and Management. His BA is from UC Berkeley.

Director of The Center on Crime and Community Resilience at the University of Pennsylvania.

Executive Director of The National Institute for Criminal Justice Reform.

Our work is generously supported by organizations including

What People Are Saying

As community organizer for over two decades, the CPSC has been a truly invaluable partner in helping to transform cities and police departments to not only build trust but to effectively address the epidemic of gun violence that has plagued Black and Brown communities for generations. The level of hands-on engagement, expertise and commitment by their team, puts the lives of our young men first and it is this type of values led partnership that cities need to reduce gun violence now.
Rev. Damita Davis-HowardOakland Ceasefire Director
As a city council member and as the former Mayor of Stockton, California, I worked very closely with the California Partnership for Safe Communities for many years. CPSC played a critical role in helping the City of Stockton achieve significant reductions in gun violence while also building trust between police, local government and our most impacted communities.
Michael TubbsFormer Mayor of Stockton, CA
Founder and Chair of Mayors for a Guaranteed Income
I worked with The California Partnership for Safe Communities (CPSC) for almost a decade. Their work helped the City of Oakland dramatically and sustainably reduce gun violence while also building trust between the police and communities of color impacted by violence. They are the best in the business at what they do
Chief Leronne ArmstrongOakland Police Chief
The reduction of violence is one of the most pressing, complex, and challenging issues of our time. It requires genuine collaboration between communities, civil organizations, law enforcement, and local governments. And it requires a fundamental shift in how we traditionally understand and respond to crime and violence. The California Partnership for Safe Communities stands apart because of its rigor, effectiveness, and commitment to evidence.
Rodrigo Canales, Ph. DFaculty Director, Social Impact Program at Boston University Questrom School of Business
I’ve worked closely with The California Partnership for Safe Communities (CPSC) for many years in many cities. No organization is better at helping cities undertake the difficult work of designing, implementing and sustaining violence reduction and police-community trust building efforts.
Anthony Braga, Ph.DDirector Crime and Justice Policy Lab University of Pennsylvania
Previous
Next